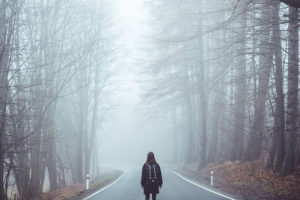 Don’t you wish you instinctively knew what to do with your life?

For most of us, deciding what to do with ourselves is like trying to find a black cat in a dark room.

We fumble around and generally get frustrated.

In contrast, some people just seem to glide through life making one good decision after another. The cheek.

So, how do we be less like us and more like them? We’ll get onto that in a second, but first, let’s look at how the majority of us approach life.

Listening to Your Instincts

We all spend so long with our heads down, ploughing through every day that sometimes we look up and see we’re heading in the wrong direction.

This could be continuing in a job we don’t especially like or persisting with a relationship turned sour.

Do this for long enough, and years may pass before we finally realise we’re in a place that we don’t want to be.

But it’s so easy to do. With work to do, bills to repay and Netflix to binge, it’s easy to simply go through the motions, until eventually we’re left wondering why, on the alter of 1000 monkeys, we’re doing it in the first place.

Ah, the busyness of life.

You see, it’s easy to bury the signals that things aren’t right. We pass them off as feeling tired or a bad day when really they’re the faint siren call to make a change.

But we can only ignore these feelings for so long, until unhappiness creeps up on us like a stealthy foe, emerging from the shadows.

That’s the tough part of it.

Because of its insidious onset, our discontent can be hard to diagnose or attribute to a single event, especially if we haven’t developed our intuitive abilities.

As negative thoughts and feelings build, they gather momentum, until invariably something breaks.

By embracing the power of intuition, we can (hopefully) pre-empt such breakages, skilfully navigating this extremely difficult assault course we call life.

So What Is Intuition?

According to our chums at Wikipedia,

Intuition is the ability to acquire knowledge without proof, evidence, or conscious reasoning, or without understanding how the knowledge was acquired.

In his splendid book, Blink, Malcolm Gladwell covers the topic of intuition in great detail, with many examples of its uses daily life.

Perhaps you’ve had that feeling that someone was a bit of a wrongun’ and should be avoided.

Or maybe you’ve had a bad gut feeling that something’s amiss.

From an evolutionary perspective, such mechanisms proved extremely useful and are an important reason we’re around today at all.

When we were but simple cavemen, it was important to know there might be an evil predator waiting to eat us.

Our spidey-sense intuition helped us avoid such unpleasantness.

So can we all agree that intuition is good? Good.

Now how do we improve it?

So, here’s my advice in all it’s sparkling glory.

Firstly, you have to get a colonoscopy. I’m only semi-joking when I say this.

Rather than baring all at the local spa, you need to do perform to mental hygiene.

Now I know I bang on a lot about meditation in various articles, but that’s just because it’s so damn sexy.

If everyone did a little daily mindfulness, I’m convinced the world would be more jelly beans and kittens and less scandals and violence.

But for the purposes of this article, it really helps to tap into our intuition.

Part of the issue with the modern world is that we’re bombarded with so much information, we struggle to hear ourselves through the noise.

When opinions are being thrown around Internet land like sausage rolls in a food fight, it’s unsurprising that we absorb thoughts and feelings that aren’t necessarily our own.

Add to that the dastardly algorithms employed by some of our most beloved media corporations, and we have an issue.

We become brainwashed digital zombies. unquestioning in our consumerism.

That’s where meditation comes in, helping us find our way back to ourselves like a drunkard in the night.

Just sitting in a room by yourself, avoiding shiny pictures and colours on our phone is surprisingly relaxing. Who would’ve thought?!

All of those racing thoughts and mental tomfoolery finally settle down, until you can hear, like a whisper in the night, the faint call of inner guidance.

Great, so that’s number one out of the way. Juicy, meditation intuition.

Number two will help us tap even further into our psychic ability until we can (perhaps) talk to animals. Or at least make better decisions.

Here’s the thing. Most of us carry around a lot of mental baggage.

If it was in the physical realm, it would be like heaving dumbbells around all day, just to find that after a while, our little arms start to hurt.

Well, it’s the same principle with our poor brains.

Morning pages, not to put too fancy term on it, is unfortunately not my fancy term.

It belongs to Julia Cameron, who penned the book ‘The Artist’s Way’, in which she extols the benefits of daily journaling, first thing in the morning, as my title suggests.

Building on scientific evidence promoting the use of journaling for happiness and wellbeing, Cameron suggests that lives can be turned around with this simple method.

And if there’s a better method to help with intuition, I’ll eat my hat.

The process of letting go is a powerful one. Having a good old brain dump each morning lets you access and uncover parts of yourself you may have been suppressing.

It’s a great way to release mental constipation and access parts of your subconscious not available in the daily hubbub.

My advice is to employ a Kerouac-style stream of consciousness writing, where you just start writing without a filter and see what goodness turns up.

According to Cameron, it’s advisable to use good old fashioned pen and paper and continue for three pages so you can squeeze your entire mental lemon on the page.

Go with the Flow

Ok, so this exercise is more personal and anecdotal in uncovering lost instincts, but I’ve found it a useful way to reduce mental noise and tap into intuition.

Flow was originally a term coined by Mihaly Csikszentmihalyi (if you can remember this name the next time you’re at the pub with you your mates, you’re a better man than I) in his book of the same name on human psychology. It’s another way of saying when you’re absorbed in an activity and in the zone.

Like an artist lost in their painting or an athlete so involved in a game that they barely notice time passing, a flow state is a powerful psychology phenomenon, shown to improve aspects of wellbeing.

As you’ve seen from the previous points, rediscovering our gut feeling is more about reducing the input and calming our minds to allow elements of our subconscious to rise to the surface.

The more activities we engage in to reduce the cognitive tumult and enter states of being as opposed to doing, the more attuned we can become to the dark whispers of our soul.

Are you a person who gets so lost in re-ordering your sock drawer that you forget to eat and wash? Well, pencil in some non-negotiable sock organisation time in the diary.

When you have an activity, craft or game that you can immerse yourself in, the benefits of manifold.

I’m betting that, like lightbulb moments in the shower, you may have a few epiphanies when you’re going with the flow.

Hopefully, we can now see the benefits of listening to our instincts.

Don’t get me wrong, sometimes it’s necessary to use conscious thought to outsmart our instincts, but at other times, our intuition can be an important signal in the decision-making process.

Don’t get me wrong, I’m no subconscious whisperer.

I can sometimes barely decide what to have for breakfast, let alone divine my true life course.

However, I’m working diligently on the exercises above, and while they’re not just effective for developing intuitive abilities, I’m pretty convinced that soon I may be able to bend a spoon or something.