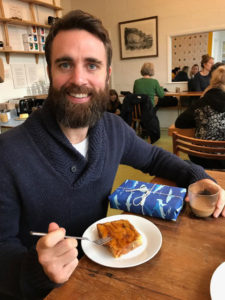 And in truth, it feels like somewhat of a milestone. A time to lift my eyes from the asphalt and see where the hell I am.

As my brother wrote in his birthday message, “I hope you’re growing your beard to new and distinguished lengths, along with your age.”

My reply? “Yes brother, it’s suitably out of control, like my advancing years.”

You see, we get so caught up in the busyness of life that often we fail to take stock and reflect on where we’ve been and where we’re headed.

35 seems like a tipping point. Our younger years are ripe for tinkering and probing, pushing up against the boundaries of possibility.

Much of my 20’s and early 30’s was spent in such exploration; of the world, work and myself.

And much fun was had, not to mention the unexpected paths illuminated by jumping into the dark void.

But living the experiential life also comes at a cost. You can go broad, but not necessarily deep.

And there comes a point when focus is required to commit to greater pursuits.

To that end, I’ve become steadily intent on investing in myself, working hard on compounding habits that might yield some shiny rewards over time, or not.

You could say that I’m enjoying the process instead of fixating on the result.

Much of this involves paring down, a psychological minimalism that liberates energy for more creative pursuits, responsible in part for more frequent ramblings on this site.

This year’s gone quickly. It seems like they were just removing the Christmas market a couple of months ago, while they’re now resurrecting it from the ashes. Not to mention Christmas adverts. Never a good sign in November.

We’ve moved to a new city and established ourselves in local life while trying to escape to nature as often as possible.

Unplugging the digital cord has been a vital addition to otherwise laptop-heavy days. The restorative properties of the Devonian and Cornish countryside and coastline cannot be underestimated. Demons don’t like fresh air after all.

This year I’ve managed to work on a couple of exciting projects in health and social care, one for a charity doing important work and another for a technology startup helping to improve lives.

In addition, I launched bloomsoup, this little online bazaar of Internet goodness.

I hope to use the site to liberate the elusive muse from its lair and establish a regular writing habit, while also developing new skills. Plus, it’s just fun. So we’ll see how it goes.

En fin, It’s been a grand old 35 years. Here’s to infinity and beyond my little bloomers.