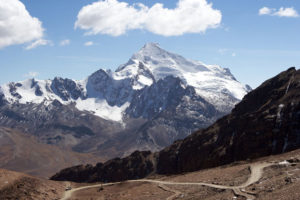 “I’d like to climb a mountain please”, I say confidently.

“Yes Sir, and which one would that be?” says the lady behind the desk.

“The big one over there”, I say, pointing to a looming monstrosity in the distance, half obscured by cloud.

“Fine”, she says, tapping away at her computer, “Have you ever climbed a mountain before?”

Hmmm, not that I can remember.

“Because if not, maybe you should try the smaller one first,” she says, motioning to a neighbour that appears of equal size.

I leave the tour agency and am immediately basked in sunlight that, at 4,000m above sea level, isn’t enough to penetrate the cool air.

I’m in La Paz, Bolivia, the highest capital city in the world.

I return to the hotel where my friend Olaf is lying in bed battling a fever.

I need to wait for his health to improve so we can continue the next leg of our South American odyssey into Peru, and this expedition takes up enough time in addition to ticking off a new life activity.

However, comparing my meagre possessions to the list of essential items needed to climb a mountain: I see that don’t own any of them.

Luckily, being half Norwegian and clearly used to the cold and climbing things, Olaf lends me the provisions.

Close up, the mountain appears massive, definitely too massive for someone to climb.

Lesson one in “how to be a mountaineer”, according to the guides, is ice wall climbing.

As I repeatedly slip off the ice face in ungainly fashion, to be suspended reassuringly in mid-air by the taut safety rope, it’s clear that mastery of the technique requires more than an afternoon’s practice.

We learn how to tie safety knots and belay each other — skills I rather quickly forget — and are subsequently deemed safe mountain climbers.

Left for the rest of the day to acclimatise before a log fire, all talk between the group is on the forthcoming climb.

Our party is made up of eight people, spanning a variety of nationalities.

Some are taking a few weeks off work, while others like myself are away on a longer sojourn.

Regardless of background, it seems that everyone has at least some experience with climbing, hailing from what you might call, outdoorsy countries.

Also, it turns out the stories I’d heard since signing up for the climb are true; a staggering 40% of people don’t summit, and only those who’ve previously climbed mountains generally make the attempt.

Why didn’t the lady behind the desk warn me of these facts, I wonder?

I wake up early the next morning after anxiety-filled sleep and we embark for base camp two, a long arduous climb over steep boulders and loose stones.

Fortunately, the scenery is a welcome distraction from my burning lungs.

Eerily quiet bodies of water harbour pristine reflections of the imposing landscape, mirror images that trick the mind all too effectively in the toxic altitude.

Six hours later I haul my cement-filled boots up the last gradient and reach the camp.

We stow our gear and begin snapping the obligatory photos while pretending to step off the side of the mountain.

The weather turns quickly and clouds engulf the cabin, so we wolf down a carbohydrate-laden meal, and are instructed to sleep until midnight.

If we depart then, states Diego, the head guide, we should summit just before sunrise. 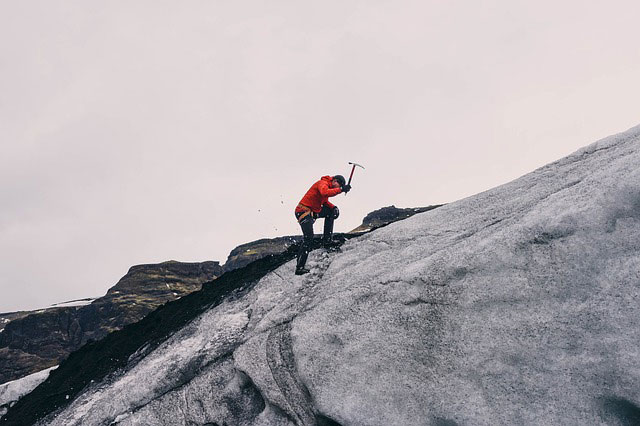 Diego ensures that we’re roped together in groups of three, two people plus a guide.

I’m teamed with Tim, who gives the impression he’s climbed thousands of mountains in his lifetime, and Diego the head honcho.

We set off briskly up the snow ridge in a darkness so complete I’m unable to see my hand in front of my face.

Every step uphill feels the equivalent of five steps on normal ground, and I expend valuable energy slipping repeatedly on the snow before hauling myself back up.

After 50 steps, it feels like I’ve walked a mile.

After 100 steps, my calves are burning in lactic acid overload.

After 150 steps, it feels like I’ve run a marathon.

Dostoyevsky said that if you try not to think of a polar bear, you can’t get the blasted thing out of your mind…

It turns out the same can be said for mountain climbing.

I try to suppress the suffering by imagining I’m relaxing on a sunny beach but it doesn’t have the desired effect.

In a flash of inspiration I remember I’ve brought some coca leaves from La Paz, a plant sucked in its raw form across Bolivia.

I’d first seen it used in the working mines of Potosi, the miners using the plant to prevent tiredness and work longer shifts.

I wedge as much possible between my gum and lip and suck desperately, banking on its altitude sickness preventing properties.

The marching continues without respite for hours.

All I can do to take my mind off the relentless struggle is to look at my feet and count my steps.

Fortunately, as we’re walking in darkness, I’m not missing any panoramics.

After encountering another snow ridge and barely making it to the top, I feel like I’ve had enough.

However, the rope coming from the harness of Diego continues to snag and drag me along.

As our surroundings become visible in the emerging light, I know we can’t be far from the summit…

…which is lucky as the effects of altitude continue to shut down my life systems.

I wait for Diego to climb a ridge ahead and, looking back down the blanket of white snow, see an ant-like chain of footprints mapping our zigzagged progress around various ridges and crevasses. 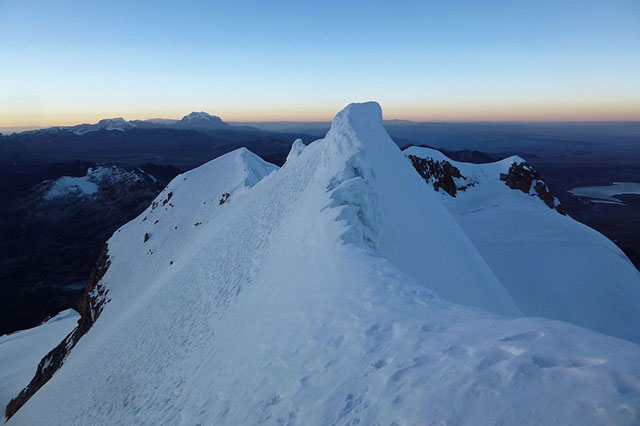 After more unceremonious scrambling with the ice axe, I haul myself up the final ledge to see the outer lip of a red sun bursting over the horizon.

We’ve summited, and to mark the occasion we make a sign and take a photograph.

My beard is depressingly ginger but pleasingly bushy, to the point where I could’ve been lost in the wild for months.

I’d felt like a broken man earlier in the climb, but now I stand triumphant at 6,088m above sea level.

Hulking mountains spring up majestically all around us through a perfectly formed layer of cloud, the peaks resembling snow-covered ice cream cones.

The colours are deep and intense, and as the sun looms up to dominate the landscape, the mountain’s infused with an orange glow.

My sunglasses barely contain the glare.

Life seems pristine at high altitude, so quiet above one of the world’s most frenetic cities.

We’re only able to enjoy the spectacle for ten minutes as other expeditions behind us vie for their turn at the top.

Relinquishing our throne, we begin the unenviable task of descending into reality.

I’d anticipated that coming down would be fairly straightforward, although after half an hour, I realise it’s probably the hardest part.

Unable to consistently establish good contact between my crampons and the snow, I slip and slide downwards.

My thigh muscles creak and plead under my body weight.

Even though it had taken seven hours of climbing, it takes at least half that time to descend.

However, descending in the daylight does provide an opportunity to see the scenery we’d missed climbing in the dark.

If I’d known what I’d been climbing that night, I probably would’ve walked straight back to the bright lights and warmth of La Paz without regret.

I shuffle nervously down ridges, exposed on either side to sheer drops, and begin to appreciate the rope and ice axe even more.

Reaching the bottom of these mini mountains, I feel like I’m close to home, only to find more blocking our path.

Meanwhile, the sun glares in a cloudless sky, reflecting glassily off the mountain.

Leaving the base camp to jump on the minibus back to the city, I look at the mountain that had seemed unconquerable.

But after two days of body-shattering physical and mental effort, I’m a broken man.

I never want to see a mountain (let alone climb one) again.

I’ve ticked one more activity off the list, but will I ever climb another one?

Let’s just say that for now, Huayna Potosi, you’ll do me just fine.