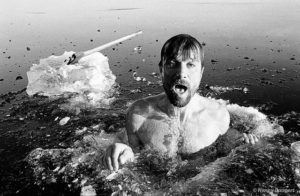 Want to strengthen your immune system with some simple, but effective, Wim Hof breathing and spine-chilling therapy?

Not only has he climbed Everest in nothing but his shorts, but also swum the length of a football field, beneath a sheet of ice, on one breath.

When I first heard about these incredible feats, I naturally wanted to know more about this crazy cat and the celebrated Wim Hof method.

A few years ago I was diagnosed with an autoimmune condition affecting my skin.

At first, I thought it was due to living in China with its heavy pollution, but while the cause was unknown, it provided a good excuse to look at ways of strengthening my immune system.

More recently, I discovered the Wim Hof breathing and cold therapy method, which seemed like it might just help.

According to reports, I’d heard it could help to reduce inflammation, which according to Wim, contributes to many diseases.

After trying the technique on and off with subjectively good results (and seeing another recent interview with Wim – linked later in this article), I wanted to look at some of the research behind the method.

The Science Behind the Effect

What’s intriguing about the technique is that Hof is subjecting himself to rigorous scientific research in order to verify the effects that he and his students have observed.

While his feats of endurance alone have attracted many admirers, it’s his efforts to validate the approach that appeals to potential sceptics.

Undoubtedly, these practices have given the Iceman near-superhuman abilities, attracting the attention of the scientific community.

In 2014, Matthijs Kox injected participants of the Wim Hof method with an inflammatory agent while performing the exercises. Results showed lower levels of inflammation, fever and nausea compared to a control group.

The suggestion is that this could be the result of the release of adrenalin precipitated by deep breathing, although one caveat of the study is that the individual aspects of the method weren’t isolated to identify the exact cause of the effect.

The results were surprising, with Hof able to artificially induce a stress response to cope with the temperature change.

What’s normally felt as severe discomfort by most people, Hof is able to turn into a euphoric experience, stimulating the part of the brain that releases opioids and cannabinoids, the body’s natural painkilling substances.

By innervating his sympathetic nervous system he’s able to self regulate, controlling both core and skin temperature.

It might be easy to simply label Wim a genetic anomaly. However, he has an identical twin, who, despite having the same genetic makeup, was unable to perform similar feats of endurance during testing. Until that is, he started practising the method. 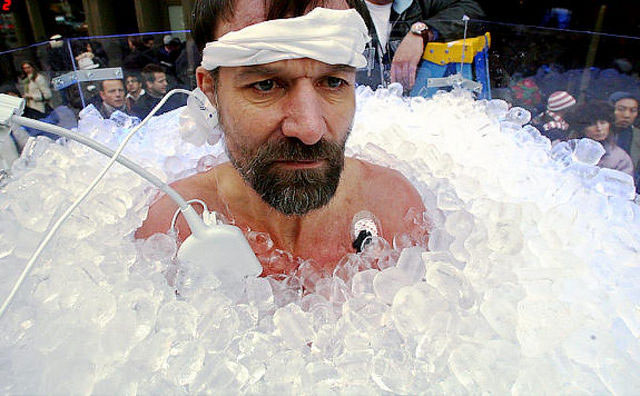 The Benefits of the Wim Hof Method

In addition to being able to withstand extreme discomfort, Hof says that by accessing a more primordial state through the exercises, we can tap into a deeper level of happiness, strength and health.

Looking at testimonials around the web from those who’ve completed the training, it’s hard not believe that such benefits aren’t accessible to us all.

From more energy, lower stress and the aforementioned improved immune response, Wim Hof breathing and cold therapy may certainly be a cheaper, safer option than some of the pharmacology we’re usually prescribed for health disorders.

More than anything, the approach suggests a deeper mind-body connection that has been proposed with techniques such as yoga and meditation.

You might have already heard of Lamaze breathing or 4-7-8 breathing. So, how does Wim Hof breathing differ? Let’s take a look.

1. Get comfortable – you can either perform the method in sitting or lying. Crook lying tends to be a good position to relax your lower back and allow you to fully inhale in comfort.

2. Perform 30 deep breaths. Inhale and exhale through the mouth. Inhale as far as possible, and then release the air without exhaling fully. You might feel a slight tingling as you do this, which is a normal sensation.

3. After 30 deep breaths and your final out-breath, hold your breath (with no air in your lungs, for as long as possible, until you experience the gasp reflex). Most people are surprised that after oxidising their bodies, they can hold their breath for two minutes or more.

4. When you do finally need to take a breath, inhale fully and hold your breath again, but this time only for 10-15 seconds.

6. After you’ve done as many rounds as you have time for, start meditating. Try to do at least five minutes of regular meditation, where you focus your attention on your normal breath. If you’re a more experienced meditator, Wim Hof breathing can provide a great warm up.

Bonus – when you’re comfortable holding your breath in step 3, you can start to perform physical exercise, like pushups or stretches, during the breath hold.

Note: for safety, don’t perform this technique while driving or in the bath (or anywhere else you might pass out). Also, consult a doctor if you’re pregnant or have another medical condition, to check if the approach is suitable.

Ok… breathing done, you can move onto the cold therapy. Note, that I actually do this in reverse order, simply because it fits better with my morning routine.

If you’re new to cold therapy or don’t have a bath, start with cold showers. I prefer the contrast of starting with a warm shower and training myself to endure the shock (and discomfort!) of turning the water cold.

If you really struggle with this at first, you can use a method of graded exposure, whereby you only immerse your feet and legs, before slowly building up over time.

I prefer the plaster ripping method, however, and just going for it 🙂

Note that the initial shock, shivering and some degree of hyperventilation can occur. I like to take some deep breaths and focus on the feeling of respiration, similar to meditation.

Obviously, if you’re breathing deteriorates and you’re a shivering wreck, get out and warm up.

When you’ve acclimatised to showers, you can always graduate to the big leagues and try cold baths. The aim of the baths is to focus your attention once more and gradually increase your cold exposure over time.

According to Wim, the cold therapy strengthens small muscles around your veins, making your heart works less to pump blood around your body.

Personally, I also use cold therapy as a psychological tool to gain credibility with myself.

A truism of life is that we only grow through discomfort. By exposing ourselves to graded discomfort every day (read – stuff we really don’t want to do!), we’re inoculating ourselves against the other stressors that life routinely conjures up.

The sense of empowerment after completing the Wim Hof breathing and cold therapy infuses the rest of the day with a renewed sense of purpose.

Feeling is believing, so to understand if this method can help, you really need to give it a go.

I’m a big proponent of running life experiments and 30-day challenges, which permit testing approaches that might be worth cementing into longer-term habits.

In my own experimentation, I’ve found it helpful to perform the technique with the accompanying YouTube video, in which Wim was teaching the technique live on the Joe Rogan podcast.

Wim also has a free app allowing you to track your progress with the technique, which I would suggest downloading to keep you more accountable.

The Way of the Iceman

If you want to learn more about Wim and his approach, I highly recommend checking out the following Impact Theory video, which does a great job of delving into the science with some interesting back and forth:

Wim is a seasoned meditator and yogi, and as part of an integrated philosophy, I think his approach could help many people.

I’m certainly feeling the benefits already, so give it a go and let me know how you progress!