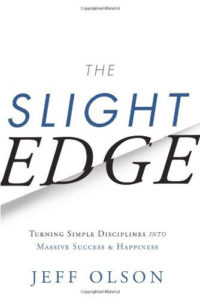 It’s easy to dream of great achievements when you’re young.

I mean, you probably had ambitious plans.

The world was full of possibility, a fairground of potential.

But fast forward, and if your dreams have failed to materialise, your outlook may have changed.

Rather than the upward trajectory you’d always envisaged, life may be dragging you down instead.

Perhaps it’s become a battle to simply get by.

Well according to The Slight Edge, there’s an explanation for this phenomenon (but more on that in a minute).

The Slight Edge starts with a story about a beach bum and a millionaire who were good friends.

They had a similar upbringing but chose different paths in life.

The beach bum decided to lift weights and chase girls, while in contrast, the millionaire finished at the top of his class before conquering corporate America.

These two people are one and the same; Jeff Olson, the author of the book, at different times in his life.

When he was the beach bum, he mentions a moment of epiphany, when he made a conscious decision to transform himself into the type of person capable of making a million dollars.

Following that decision, he founded numerous successful businesses in the personal development and direct sales industries.

The Slight Edge is an explanation of how he did it; A philosophy for success gleaned over the course of his career.

So What Is The Slight Edge?

Here’s a distillation of The Slight Edge in one sentence:

Simple daily habits, multiplied by Time [through the magic of compound interest] = Success

Is it that simple? Yes.

Is it that easy? Not necessarily.

Like most self-improvement advice we know to be true, the core concept can be difficult to action.

Which is where the book steps in to distil practical advice.

Every day, you make a million little decisions.

At first glance, these choices don’t seem like much and appear of little consequence.

And taken as stand-alone events, they aren’t.

But when you analyse the cumulative effect of these little decisions, they start to resemble something bigger, a gestalt that could significantly impact your life.

One day won’t hurt, you think to yourself, before devouring a juicy burger.

But if you multiply that little choice by all the times you’re wooed by the perfect, sexy, meaty patty and fast forward a year…

You’ve eaten burgers a couple of times a week and you’re suddenly larger. Much larger.

The worst thing about these seemingly innocuous little choices is that they begin to occur on autopilot.

You’ve made the decision once and it becomes a slippery fish of a choice, not worth even thinking about.

And it’s not just with food that we face these decisions. It’s the same with your relationship, social life and career.

But their effect is so insidious in our push button, instant gratification society, that we’re unable to zoom out and appreciate the bigger picture.

Our reptilian brains only recognise the cookie at arm’s length, unable to interpret the effect of that cookie, and all it’s little brothers and sisters, in five years time.

That’s where those dreams can go unrealised, all of the daily mini-choices you’re making potentially contributing to your struggle.

So, what’s the solution? 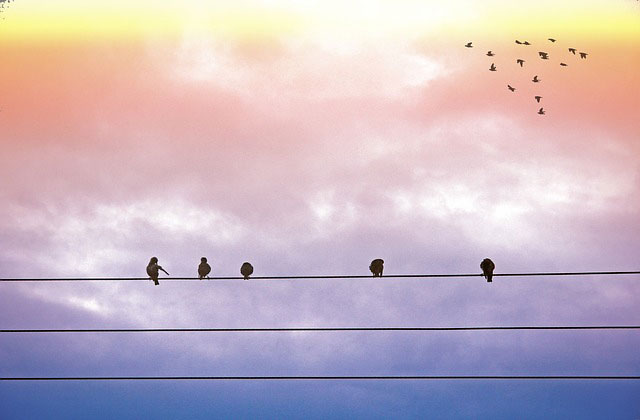 Slow and Steady Wins the Race

We all know about overnight successes; the Gates’, Jobs’ and Zuckerbergs’.

What we don’t see is the years of committed, steady, persistent action they’ve taken to arrive at their night of success.

These people understand the slight edge.

They know their future is determined by the sum of the small, seemingly unimportant choices they make in each present moment.

The unglamorous decision to complete that final job of the day, when their eyelids are heavy with fatigue.

They make the right decision now, which transforms them into the right person later on.

That’s the foundation of the slight edge.

You still have your goals.

Even if they’ve been buried under the responsibilities of life, they still exist, waiting to be discovered.

And deep down you likely already know what actions are required to reach them. You might not have an exact plan, but probably a good general idea.

Want to write a book? You need to get some words down on paper.

Want a new job? You’ve got to fire off some CV’s.

What small choice can you make today, that through compound interest, will snowball into the attainment of your goal?

It doesn’t have to be much. You just need to start with one item and take action.

When you make the right choice enough times, it subtly transforms into a simple daily habit.

Just like eating the burger in our previous example became a learned, automatic response, so will your positive action.

Through the science of consistency theory, you’ll start to mirror that behaviour to maintain its image; an image of someone who makes the right choices in the right moments.

Simple daily habits, multiplied by Time [through the magic of compound interest] = Success

Choose positive daily habits, focus on the system, and as if by magic, your dreams will take care of themselves.